I Shot The Sheriff with Carolyn Dutton

Live from the Living Room with Monika Herzig, streaming live from our living room twice a week.

This is a compact little piece recorded on a recent gigless Saturday evening. Not as restless anymore like I used to be.

After fiddling with seven string guitars for a decade now, I found that it had not only expanded my horizon as a guitar player, but even more so infused new ideas and inspiration into my composing (not to mention the thourough exploration of rarely used keys). So, a few years ago, I thought maybe upgrading to eight strings might have the same effect. In a way it did – but more so because most of the time my musical brain just had no clue what notes were under my fingers on the 7th and 8th strings. Like a beginner I had to calculate rather the know what note was on a given position.

On the seven string guitar I had run into the same problem, compounded by the fact that existing guitar literature doesn’t offer much for extended range instruments. On the seven string I eventually adapted some Bach piano music to challenge myself to learn what that extra 7th string can do. For the eight string guitar I am working on new adaptations. This version of Bach’s Three Sonatas and Partitas is originally for the violin. It turned out that transposing it down an octave and writing it in bass clef would lead to a good low range workout on the eighth string. I admit that some of the lower chord voicings can be a challenge. They are harder to finger because of the longer scale and therefore wider fret spacing.

After I started playing through the whole set of pieces to check for accuracy I thought it might be a good idea to transpose some of them as low as possible. This would put them into new, unfamiliar keys and add even more challenges. For an added side effect the open strings in the lower keys come in handy in some spots.

These are for a guitar with added B and F# strings, although, if you tune your extra strings to A and E it could also work. You can use a pick or your fingers or any hybrid approach you like. Unlike in the transcriptions from Bach’s piano music, I didn’t use any fingerings or TAB. The main purpose for me on this project is to challenge my sight reading. While my brain knows fairly well that the shell voicings (for example) replicate on the lowest strings, it still takes me an extra split second (and sometimes much longer) to intellectually grasp what note or chord I am playing.

Thank you J. S. Bach for such gorgeous music.

Three Sonatas and Partitas for 8 string guitar is a free 178 page PDF. 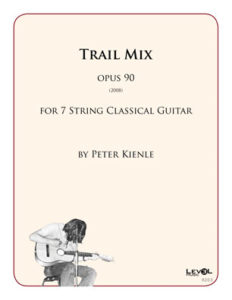 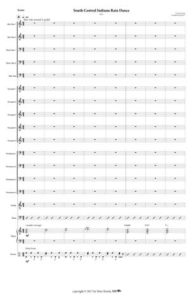