I can't imagine you would be really interested in my stuff - it's nothing special. But people have inquired about it, so there.... 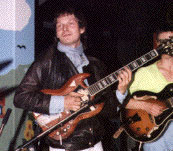 I got my first electric guitar when I was 15. It was a Framus SG copy. It was a nice guitar, indestructible (I still have it), and I soon put a DiMarzio pickup in it to get more *POWER*. At that time in Germany amps were still really expensive and besides old Vox AC 30's you really couldn't get anything decent. So in order to play with my first band I altered my Mom's tube radio. It was huge and sounded pretty cool. Keep in mind that in Germany you have to be at least 18 before you can get a driver's license. So for the first few years we had to recruit parents and older friends to get us to gigs and rehearsals. In the wintertime there usually was lots of snow and more than once we ended up using a snow sled for transportation (a vicious sled accident also terminated the life of my mom's tube radio - although later on, directly experiencing 220V AC for the first time, I managed to restore it).

Then, around the age of 17 came my first real band. It was just a trio: bass, drums, guitar. And we jammed once or twice a week. I had borrowed equipment of which I remember an old HH amp (british make, the illuminated control board with the knobs on it looked like an airplane dashboard). I fondly remember that old MXR Phaser.

At age 18 I inherited a Framus hollow body guitar from a guitarist friend who had died in a motorcycle accident. Although it played horrible and couldn't be compared to any other hollow body I know (especially not a 'real' jazz guitar), I slapped an old humbucker on it and made it my main guitar. With .013 flat wounds and an action never seen before, every gig was a finger workout. This was also the time when we founded 'Super Susy'. This was a Free Jazz outfit and we actually played some serious gigs. A little later I finally bought my first amp, a Polytone Teeny Brute. Without any effects whatsoever it sounded dry and unforgiving but was easy to carry (which was important, because hitchhiking was still necessary off and on).

Around age 20 I bought an Ibanez Ragtime guitar. That's basically like a steel string Western guitar with a cutaway and 24 frets. Together with a guitar student (Uli Fischer) and another guitarist (Manfred Brietzke, in the SG picture he is the other guitarist) we put together the acoustic guitar trio 'The Real Guitarists'. Over its two year life span it was a highly successful outfit - probably mainly due to the wacky vocals and clothespins worn on the nose while doing 'Jingle Bells'. We also did powerful renditions of famous classical pieces such as 'Sabre Dance'.

At age 21 I moved to Kehl, Germany, which is just across the river Rhine from Strasbourg, France. I bought an Ibanez George Benson GB 10 and played my first regular gig. This was eight performances a week (one every night from 8pm-1am and one additional on Sunday afternoon). Although at that time I thought I was pretty good, tapes recorded back then prove me utterly wrong. It was a pretty upscale restaurant in Strasbourg and people like the british rock band Yes, Dave Brubeck and others were usually stopping there for food. But nobody ever said anything good or bad about the band....

Around age 23 I started working for Musicland recording studio in Albstadt, Germany. Not only did I have access to the studio to do my own stuff but there was also a huge music store on the ground floor where I could borrow all the equipment I ever wanted. This is when I discovered MIDI and sampling and such. 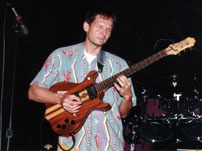 Around 25 I was given a Kist solid body by a friend. Apparently the guitar had been put together by somebody from spare parts and went through a few players' hands, before it ended up with me. The guitar has an asymmetrical, ultra-thin neck and neck-through-body construction. Everything about it seems odd and out of place but I kept it and it appears on every BeebleBrox recording since Bloomingtoon. Since then it has received new Seymour Duncan pickups, has been rewired, and I put string saver saddles on it. (The white button on the upper half of the body is a door bell push button. The door bell was too big to fit in....).

In 1988 I moved to the US. It took a few years to get all my guitars over the Atlantic - as a matter of fact the old Framus hollow body is still at my in laws house in Germany. Now I use my Ibanez George Benson GB10 for straight ahead gigs. My Peavey Backstage plus works good for low volume settings without drums and a Yamaha series 3 112 works well and sounds clean for louder occasions. 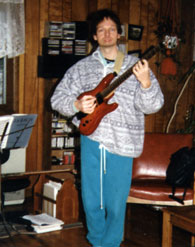 As I said I still very much use the Kist solid body. When I travel by plane I use a Steinberger Spirit. That has a little more body mass than the original Steinbergers. It's also small enough for an overhead compartment. As you can see in the picture I am missing the regular head stock! The solid bodies I run through a Sans Amp tube emulator pedal and a Digitech DSP 128+ for reverb and echo. Lately I have added an Ibanez Rotary Chorus which sounds gorgeous in stereo through two amps.

A few years ago I got a Godin Multiac nylon string guitar. I use it for everything. And with the use of a Roland GR1 guitar synth which also triggers a Proteus2 Orchestral Module I even play rock gigs with it. This setup I amplify through a Roland AC100 Acoustic Chorus.

Very rarely I am using yet another old Framus guitar I bought a long time ago. This is a twelve string electric, thinline hollow body. It also has received new single coil pickups. I left the fake f-holes on it. 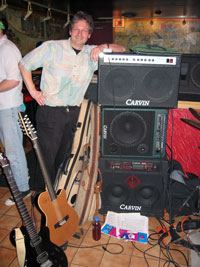 Since March 1998 I am also the proud owner of a Chapman Stick. I now spend a lot more time practicing that, than the guitar. With my new fusion band Kwyjibo I play almost half of the music on Chapman Stick now. It's not easy to amplify, especially with a loud drummer and bass player next to you. I run it through a Boss ME50 effects pedal. It's also hooked up to my VG8. On smaller gigs the Chapman Stick and the VG8 go through a Carvin AG 100D acoustic guitar amp. For more volume I run a line out of the AG100D to a Carvin Red Eye 600W bass combo or even better through a Presonus BlueTube into a little mixer and from there into a Mackie SRM450 active monitor.

My main guitar amp for the past few years has been a Carvin MTS3212 tube amp. In the summer of 2005 somebody gave me a Carvin 4x12 slanted cabinet. It was sitting in my basement waiting for a gig with Metallica. Then my MTS3212 had to go out for a major overhaul and I bought a Kustom WAV head. It was on the blow out list at Musician's Friend and pretty inexpensive. Together with the Carvin cabinet it's a killer combo. The Kustom WAV has two 130W channels that feed two pairs of speakers in the 4x12. It has a clean solid state preamp and a tube driven crunchy channel with lots of useful settings. It has very useable digital effects although I still prefer my stomp boxes. The size of this combo is frightening but it works well even for larger jazz gigs. The slanted cabinet distributes the sound nicely and also provides good monitoring.

This is probably more than you ever wanted to know. Every time I tell myself 'this is the last guitar I'll ever buy' - and every time I discover something new (hint for instrument manufacturers looking for musicians to endorse).